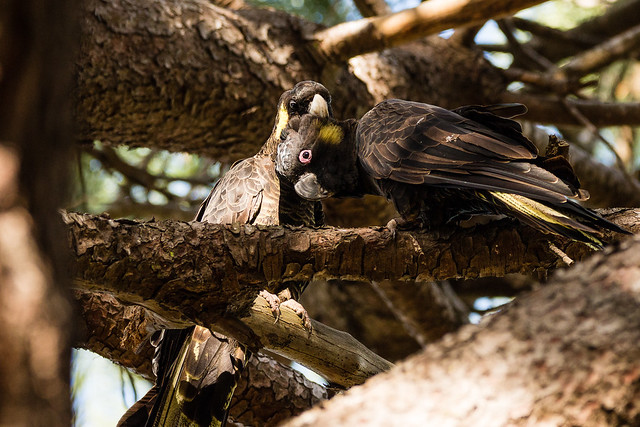 On a run in the rain this morning I heard a familiar screech. The street was lined with banksias, so I’d already been thinking about the birds. Yes – there, six of them, in the tree ahead. I said hi and one cockatoo took a focused munch into a banksia seed.

Why are we in the city blessed with such frequent Yellow-Tailed Black Cockatoo encounters? I rarely saw black cockatoos when I lived in semi-rural QLD, yet Sydney’s urban Eastern Suburbs has them in droves. As it turns out, a recent study by UNSW academics pinpoints why the birds come here every winter. It’s all to do with habitat.

Prior to the study, most of what we thought we knew about these cockatoos was assumed from studies on a completely different species on the other side of the country – Carnaby’s Black Cockatoo.

A 2015 report by Bird Life Australia found a “declining population trend” for Yellow-Tailed Black Cockatoos in south-east Australia. This was based on sightings of the birds in specific survey areas.

Unlike Australia’s other four Black Cockatoo species, the Yellow-Tails aren’t listed as threatened. But researchers from UNSW knew we needed more info about the species to prevent population decline.

The researchers used GPS technology to track the Sydney population over two years, to find out their movements and feeding habits.

A Feast of Pinecones: Seasonal Migration

On a whim I turned off the main track in Centennial Park, and found myself in a sandy arena… surrounded by black cockatoos. Groups hung out and called to each other from pine trees. I’m sure they were laughing as they flew overhead.

The study found that huge numbers of the cockatoos come to the Eastern Suburbs in winter to forage on pinecones from non-native trees in the area, including:

Of course, they also eat native seeds like those from banksias and casuarinas, and can be seen ripping into wood with their beaks to eat borer insects.

Pinecone availability decreases in September, when the birds fly inland, covering distances of up to 154km. They nest from November to February, and return to the land of pinecones (the Eastern Suburbs) after that.

There’s much more to find out! Some questions include:

How We Can Contribute: Apps!

Reporting sightings of the birds on the app eBird contributes to national and international data on the species.

Ideally, it’s coordinated data collection, where a group goes out once or twice a year, or even quarterly, to record sightings. This gives a more reliable idea of bird numbers.

This is a text widget. The Text Widget allows you to add text or HTML to your sidebar. You can use a text widget to display text, links, images, HTML, or a combination of these. Edit them in the Widget section of the Customizer.
%d bloggers like this: